Whether one is passionate or not, the study of firearm mechanisms is very interesting in many ways. Unfortunately, it is not always easy to see the different movements, the functions of the pieces and the way they interact with each other. The elementary pieces are “wrapped” in the body of the subset, of the whole, hidden from the view of the observer, limiting in fact the understanding of the mechanism he has in front of him.

What is a didactic weapon ?

One of the effective ways to perfect one’s knowledge is to acquire, to manipulate, to observe didactic weapons. What is a didactic weapon? A didactic weapon is a real weapon whose parts, often the centerpieces, have been machined.

3 ° – Didactic weapon: authentic weapon on which cuts or operations have been practiced to observe the internal mechanisms, without modifying its functioning and having not undergone the process of neutralization.

Each of these machining is an open window on features and internal interactions. They improve the field and the depth of vision of the student. Then are visible the successive steps that the user performs from loading to percussion. By reproducing the cycle at will, the student discovers or rediscovers the complete kinematics of the weapon.

Cutting and machining are destructive means. The weapon loses the ability to fire real ammunition thus its power of nuisance but acquires new qualities to enter a pedagogical and / or promotional career. It can be a barge catcher on a trade show attracting the eye of the curious or the connoisseur or both gathered in one person.

It is important not to manipulate real ammunition with this kind of weapon.

Introducing an actual ammunition into the chamber while the sectional weapon retains its percussion capabilities is extremely dangerous as it can lead to fatal accidents, serious injuries due to metal splashes.

Use inert ammunition when studying and handling a didactic weapon. 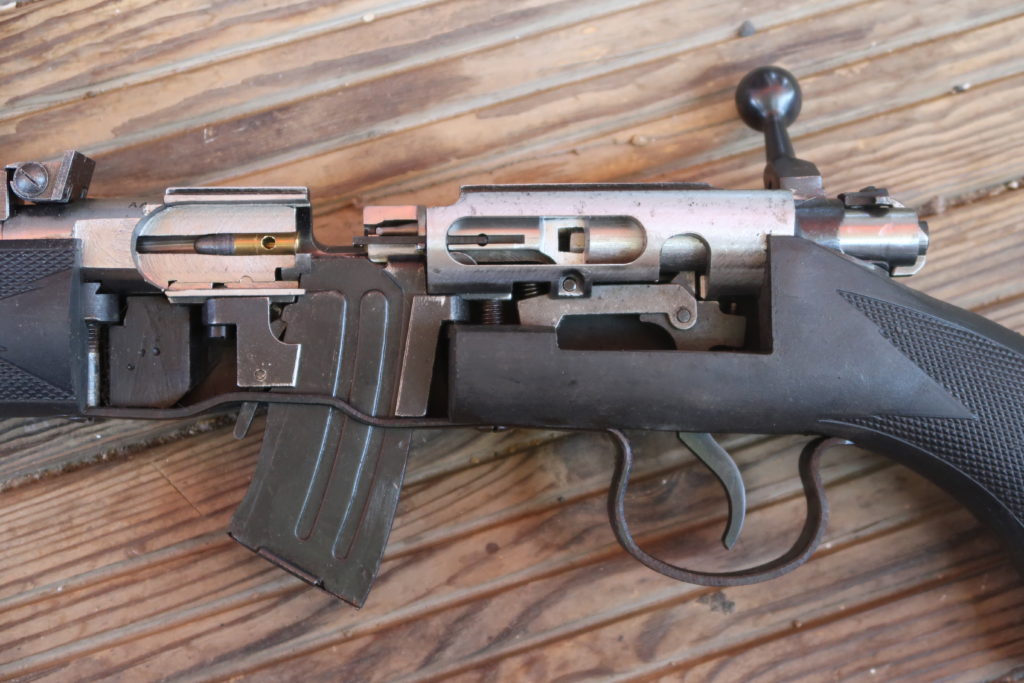 As an example, you will find attached a photo gallery of a Norinco jw 15 didactic rifle. You will be able to see certain interactions between the parts and in particular the position of the front face of the bolt with respect to the rear face of the barrel (something impossible to see on an uncut weapon when the bolt is closed).

What can we see on our rifle Norinco jw 15 didactic ?

We will detail below the benefits that cuts can bring to a firearm including our rifle Norinco jw 15.

The photo gallery above allows to visualize for example :

Use the contrast between the right part of the weapon (uncut) and the left part (cut) to a surprising size. One does not expect to find a weapon in section when it is at the rack then presenting what I would call its “commercial facade” (usually the right side).

– The state of the chamber and cone connection :

The cut is the only way to be able to visualize the real state of the chamber (possibly with a magnifying glass or a microscope). It is then possible to see its state at a given moment of the life of the weapon (dice the output of manufacture, after 500, 1000, 10000 … shots, after torture tests, after a prolonged passage in a aggressive atmosphere ….). 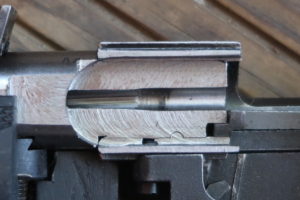 Depending on the ammunition used, premature wear may appear in the chamber (use of black powder ammunition, use of ammunition 22 short in a room 22 Lr …).

– The positioning of the base of the cartridge in the bowl of shooting :

The cut can answer the questions below :

Does the extractor take the cartridge well during extraction ?

Where is the ejector and how does it work on the cartridge case ? 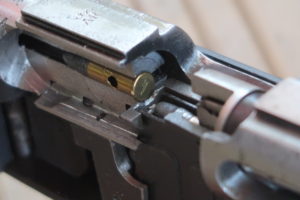 Much less complicated on a manual repetition weapon than on a semi-automatic or automatic weapon, the food remains nevertheless a sensitive point. What’s more unpleasant than a weapon supposedly repeated that works piecemeal after malfunctions. This should result in a good interaction between the chamber, the introduction ramp, the loader, the lips of the loader, the breech, its extractor and the cartridge to be chambered.

We will see on the photos attached that the supply ramp of the rifle Norinco jw 15 is almost nonexistent. The front end of the feeder well acts as a feed ramp, the chamfer at the bottom of the chamber inlet helps to ensure that the cartridge is properly inserted, and I think that the manufacturer could have made an effort and put in place a better designed feed ramp.

– How is mounted the barrel on the receiver : 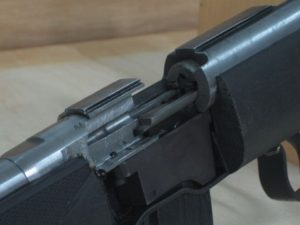 On the weapon studied, the barrel is mounted to the press, a pin of 2.5 mm immobilizes it.

– The front of the bolt on the rear face of the barrel :

The relationship between the back of the barrel and the front of the breech is interesting. The location of the striker channel, the play and stroke of the striker in relation to the backside of the barrel, the state of the rabbet for the beaded weapons are points that can be observed and quantified.

Having access to the heart of a finished parts gives us the opportunity to test the hardness of materials.

The realization of a cut weapon requires a great experience and time.

In general, didactic weapons are more expensive than working weapons. The extra cost is mainly due to the time spent to make these small series.

Nevertheless, I think it is worthwhile to create a collection of didactic weapons at a time when the regulation of weapons possession is becoming tougher and will probably harden. This collection will bring you a lot of technical information, unpublished images, it will take value in time (given the few pieces produced), you can give them or resell more easily than weapons in a state of fire.