Revolver MAS mle 1892, gunsmith work and evolution of the context

Revolvers have existed for a long time, around 1830. I will not discuss historical issues here because it is not my domain. The battles of steepled his legion between amateurs and / or specialists on details that have in my mind that little importance. However, through two articles (the second is : Comparative: the 8 mm 1892 / 7.65 Browning), I would like to offer you a reflection on the design and manufacture of gunsmithing and this through the revolver MAS mle 1892.

You may be wondering how the MAS Mle 1892 revolver is so special that it leads to a reflection of the world of armament in general and the design and armory in particular. After detailing the assets of the revolver mle 1892, I would try to put it in relation with the context that gave it this reputation of outdated weapon: the first world war. Is the 1892 revolver really so ancient ?

Before all things, I would like to pay tribute to Mr. Henri Vuillemin, editor (and therefore to one of my peers) of the book : The 1892, published by FG editions / Crépin-Leblond, on which I supported myself to write this article. 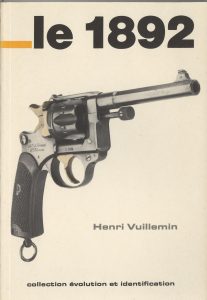 The advantages of the revolver mle 1892

If we compare this weapon with its competitors at the time, the 1892 revolver was at the forefront in many areas. What can we put to his credit :

The weight of the empty weapon is 840 grams. This makes the 1892 revolver a fine weapon, comfortable to wear. This a very elegant, light weapon, it contrasts with the big revolver reichrevolver or the Smith and Wesson in 44 russian. It is less trying to handle.

The bouncing hammer avoids the nailing of the striker in the primer. This can make you smile because nowadays it is obvious to have a hammer that comes back when the shooter releases the trigger of a revolver, but at the time it is innovative. In the absence of this principle, the hammer nose once planted in the primer prevents the barrel from rotating, the trigger is inoperative. This can damage the hammer nose and in any case waste valuable time to the soldier who will at first be surprised and then in a second time will try to solve the problem. We must admit that on a battlefield we have something else to do than solve incidents of this type.

Easy dismantling, the percussion mechanism of the 1892 revolver can be completely disassembled, cleaned and oiled by the servant. The latter is the first diagnoser of failures or weaknesses present or future. At the slightest defect, the soldier must report to the higher maintenance level and give a technical visit to his weapon by qualified personnel. For this reason, it is imperative that each soldier cleans his weapon and on this occasion inspects each piece and reports the facts that seem to him abnormal. In this sense, the revolver mle 1892 is well designed, just loosen the screw located at the top of the handle (right side) to open the trigger plate and have access to the entire percussion mechanism. 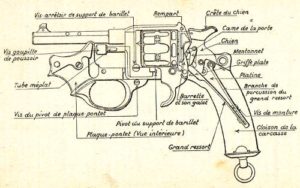 Four pieces are to be dismantled : The hammer’s spring, the hand, the hammer, the trigger. The percussion mechanism is there, in these four pieces. There is no difficulty in separating them from the carcass of the weapon. The pieces are massive (no fragile) and very well finished.

The economy was not sought on this weapon. All the parts have complex shapes and yet they are all executed perfectly. We must imagine the industrial world of the time. The milling machine, the metal lathe, the numerically controlled slotting machine … obviously do not exist. All machining is done on traditional machines (by hand) with probably many form of tools or specific assemblies dedicated to the manufacture of this weapon precisely. To this must be added a series of controllers to check if the parts fall within the tolerance.

Start a manufacturing of several tens or hundreds of thousands of pieces to a very heavy involvement. In these conditions, it is not easy to backtrack and embark on a new program as if nothing had happened.

106 years after leaving the factory, the weapon taken in pictures here is functional and in very good condition. Finishing was to be an important part of the manufacturing process. The fitting of the parts is perfect, no part bears traces of machining, no burrs are present, the edges of the parts are bright there was no fast deburring but neat work. The tan is always present, a little past in places. A patina that has its charm.

The choice of the caliber was bold at the time but not interesting because loaded with black powder. It is said to be too weak to compare with the English 455, 11 mm German, 44 russian. War is not a static ground where an enemy calmly waits to die by a projectile destined for it, just as calmly, fired by a second non-animated soldier who is also afraid of dying. Obviously no !!! hence the need to have a projectile with sufficient stopping power to give an immediate shock effectively stopping the annoying power of an enemy galvanized by its adrenaline. The use of a heavy projectile, of large diameter, moved by a high speed and which would leave all of its energy to the impact is more effective than a light projectile at low speed. The 8 mm caliber chosen for the revolver studied here had a projectile velocity of 215 m / second. not even the speed of a long rifle for a larger ball weight : 7.8 grams versus 2.59 grams for the 22 Lr. I think that the choice of this caliber comes from a desire to save raw materials and thus produce more ammunition for the same amount of raw material. With equal weight, the military will carry more ammunition. At the time, it was fashionable to want to reduce the caliber of weapons. It was an innovative choice but would have deserved a higher warhead speed.

The reduction of the projectile (to understand decrease of the diameter and the weight of the projectile) will be many years later acclaimed by the firms HK and FN Herstal, which obtain important perforations with calibers of diameter 5.7 mm for FN Herstal (Weight of the bullet: 2 grams for a speed between 650 and 750 m / s or 4.6 mm for HK (weight of the bullet : 1.7 to 2 grams, for a speed close to 700 m / s) … with an energy higher than that of a 9mm … But that’s another subject.

The revolver mle 1892 and the first world war

Why do we read everywhere that the 1892 revolver has been passed quickly ?

It is amazing to see that this weapon has become obsolete quickly as we have seen above these innovative assets. The appearance on the market of reliable automatic pistols supplied in calibres close to 8 mm but lower than the regulatory calibres in many countries at the end of the 19 th century (ie of 11 mm), considerably changed the market of the handgun. We can cite in these intermediate caliber handguns: the C96 in 7.63 Mauser, the Colt 1900 in 38 acp, the Colt 1903 in 32 acp, the P08 in caliber 9 parabellum … It is very interesting to note that an automatic gun will combine the future and the past. In 1911 was adopted the Colt 1911. This pistol conserved a munition of strong diameter: 45 acp (11,43 mm). It will cross the 20th century to get us almost unchanged, This weapon or its derivatives are still sold today.

The end of the 19th century, the beginning of the 20th century are times when the changes are terribly fast. Deep changes in society and industry take place at these times. The defeat of France in 1870 left by its lack of preparation, the desire not to be too much behind other European nations.

If the 1892 revolver is decommissioned by the ammunition it uses, it retains the advance of the double action, no automatic pistol of that time works in double action. To obtain the speed of shooting a revolver with a pistol, It was therefore necessary to keep the hammer armed and ammunition in the chamber. It should also be understood that no automatic pistol of the time is equipped with striker safety. If we add to this the fact that the steels used for Ruby pistols are of low quality, accidents should be numerous.

If the loading time of a revolver is much longer than that of an automatic pistol, the revolver is more reliable in extreme conditions. A revolver does not jam, it is not dependent on dirt from the outside. In addition, it must be remembered that the mechanism of the revolver mle 1892 is entirely removable by the servant. This is not the case for many other weapons. Try to disassemble the parts constituting the mechanism of trigger and percussion of a Ruby pistol ! The speed of loading is of interest only if the servant has a number of chargers accordingly or all Ruby magazine are not compatible, which led to some problems. According to Henri Vuillemin, in his book : “The 1892, it seems that an indeterminate quantity of revolver mle 1892 were supplied to the Wehrmacht during the terrible winters of the Russian years of 1942, 43, 44, the weather conditions making guns inoperative or uncertain shooting. While it is estimated that the 1892 revolvers are outdated in 1914, they are used thirty years later in difficult conditions.”

In the face of the trench war which will be the new standard in December 1914, the army’s staff complete the use of the 1892 revolver with automatic pistols from various sources, but mainly from Spain. The quality of manufacture is much lower than that of the revolver mle 1892. But valid the fact that the pistol will be the king (at least at this time and in this frame). It requires a fast reloading mode and a weapon shorter than the rifle to take and “clean” a trench.

The main problem of the 1892 revolver is, in my opinion, its loading principle. It no longer corresponds to the context of the time. This is not a weapon to leave the rack because if you put it in a suitable context, it will resume its value even today.

Too early in 1892, not the priority in 1914. The latter went to arms that could repel the attacks and break the lines: machine guns and artillery.

How to know that the conflict would take new forms, unknown, to become a trench war. How to predict the future? How to maintain an industrial fabric underemployed in peacetime to, if necessary, to make this industry available to the engineers of the armaments and thus to be more reactive in the event of a crisis? These questions are complex. A minimum would be a permanent technological watch, recurrent tests on the new materials, a follow-up of these and consider their evolution with interest to reorganize quickly in case and thus maintain the sovereignty of the people of France and the continuity of the state . A legitimate state that equips its soldiers with reliable and adapted equipment so that they protect it.

The desire for revenge after the defeat of 1870, the obsolescence of the weapons fleet, the lack of preparation, the rapid evolution of the techniques, the resistance to the changes, the colossal sums necessary for the maintenance or the rehabilitation of the equipment, the training of personnel, the reconstruction of the country … are factors that led to the beginning of war in red trousers, a massive purchase of weapons abroad to end in a considerable mass of wounds between brother peoples and neighbors. France, country of avant garde in 1914 loses its rank in favor of young nations less impacted. Who benefits from the crime ?

The morality of the story: Do not go to war, leading to the misery of his people, if you are not prepared … especially when playing at home.