The present article is a logical continuation of the previous article concerning the French Regulatory revolver mle 1892. You can find the first article here: Revolver MAS mle 1892, gunsmith work and evolution of the context.

This article is based on a rumor (not entirely false) that the 8mm ammunition used by the 1892 revolver is too weak. The decommissioning of this weapon would be due to the caliber employed. Another element triggering the writing of this article is the rediscovery of a comparison between the ammunition of handguns used by France during the Great War (The document is reproduced below).

This article will detail ballistics data for the 8 mm 1892 (8 mm Lebel) and 7,65 Browning (32 acp) calibres. I will draw from the comparison of these data my conclusions on the decommissioning of the MAS mle 1892 revolver.

To help me in my thinking, I will use a table from a Fiocchi catalog that is very interesting in more ways than one. Here it is :

In my opinion, this table is very useful because it gives for the same modern encartoucheur ballistic elements of several calibres of time. It is therefore very easy to compare and debate around the choices made by the various staffs and governments of the time. While bearing in mind that we do not speak of ammunition era but reproduction respecting all or part of the characteristics of origins.

The data provided by the Italian manufacturer Fiocchi (see the table above) indicates that for a bullet weight of 7.2 grams or 111 grains and a muzzle velocity of 260 m / s. The energy of the warhead to the mouth is 245 joules.

In their book on Star and Ruby pistols, the authors produce a ballistic table of the French munitions of the Great War and thus compare the 8 mm 1892 and the 7.65 mm Browning. The energy of the warheads is identical and is expressed in kgm: 19 kgm, ie: 186 joules. Even less than the figure announced by Fiocchi in its catalog.

The energy is the same for a 7.65 Browning and a 8 mm 1892. How can we say that the weakness of the ammunition 8 mm 1892 has downgraded the revolver while its replacement transmits the same energy. Is it really the caliber alone that participated in the decommissioning of the weapon ?

The cartridge of 8 mm mle 1892 is a munition with bead therefore usable only in revolver.

It was eight years after the adoption of the MAS mle 1892 revolver and its 8 mm cartridge that the Browning 1900 pistol and its 7.65 Browning cartridge appeared on the market. It will flow from this novelty a whole series of pistols of simple design and similar power of arrest.

Introduced in 1899 by the FN for use in its 1900 automatic pistol. The 7.65 Browning cartridge will shake up the market for handguns. This low pressure cartridge will allow the manufacture of automatic pistol reliable and simple because without locking system. The absence of this type of device significantly reduces the number of parts and the complexity thereof. The misdeeds of the anarchists of this period contributed, through their media coverage, to the spread of these new types of handguns. The craze is fast, it’s a popular success.

To study this cartridge, I would help you from another page of the same Fiocchi catalog. There she is :

There are several 7.65 Browning cartridge references on this catalog page. Depending on the type of warhead and the speed of the latter, the indicated energy is 175 to 280 joules. This last value is obtained by the use of a hollow tip warhead at high speed.

The 7.65mm Browning case has a very light bead. It is thanks to this bead that the ammunition will be used sometimes in revolver.

Very big commercial success which sold more than 700 000 copies between 1900 and 1912 is about 70 000 manufactured copies a year … nothing but that. We can see through the manufactured volumes that this weapon meets an expectation of the public and administrations. The gun becomes simple, compact, reliable … it is democratized. The quality of manufacture is also responsible for this success. The opportunity was given me in the past to have a Browning 1900 in hand, it is a well designed weapon, well done and very compact. It is obvious that he could only make the revolver obsolete. However, it requires the user to keep a room ammunition and an armed striker.

The Browning 1910 is the successor of the Browning 1900. It is a simpler weapon than its elder. With a perfect design, it will go through the decades without any major changes. A very important feature on this weapon is the safety pedal on the back of the pistol grip. It will be manufactured between 1912 and 1975 to more than 704,000 copies.

These weapons will be next to the MAS mle 1892 revolver in the trenches from 1914 to 1918. They are a simplification of the weapons of the major suppliers mentioned above.

France is equipped with these materials to supplement endowments without having to overload the employment of national manufactures. The number of Ruby pistols sold in France is 900,000. The number of Star guns sold to France is 24,000. 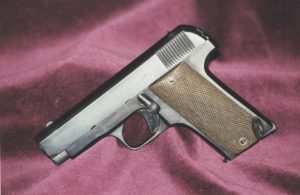 By comparing the above elements, we can see that as soon as the Browning 1900 pistol came out (only 8 years after the adoption of the revolver), this automatic weapon outclasses in some areas the French regulatory weapon of the moment:

It can be noticed that the power of the 7.65 mm ammunition is very close (see identical) to the 8 mm cartridge of 1892. Despite this proximity, the 7.65 Browning caliber will endow many countries and individuals through the world causing the manufacture of millions of weapons. These weapons will equip various government forces until the 1970s or even 1980s. We see that the reproach of power is erased from the advantages brought by the principle of automaticity. It is then possible to place several ammunition on the same objective without fear of its power or the time of reloading the weapon.

The 7.65 Browning automatic pistol has therefore replaced or supplemented in some hearts and for certain uses the MAS mle 1892 revolver or derivatives. However, although its loading requires a longer time and its capacity is lower, we must not forget that the revolver remains master over some portions of the range of uses. The use by the Germans of the MAS mle 1892 revolver on the eastern front during the Second World War demonstrates this.

The rapid evolution of the industrial context at the end of the 19th century and the beginning of the 20th century, the evolution of smokeless powder, steels have allowed a series of good technological advances rendering certain weapons and war techniques obsolete. The saber fight is over. The economy of cartridges too.

A constant demand for modernity and efficiency will lead up the steps of the podium another cartridge of intermediate diameter: the 9 mm luger (whose energy to the mouth is close to 600 joules). But that’s another story.