In this new article, we will discover the Sterling pistol in caliber 22 Lr. I wanted you to discover this little gun because it can give rise to a useful comparison with the Bernardelli Baby pistol whose description was made in a previous article. This will be an opportunity to see an equivalent (pocket pistol) but in a different caliber with other design choices. 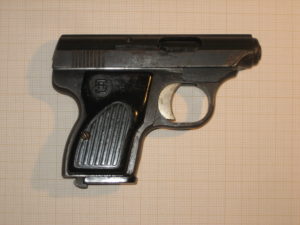 The Sterling firm did not exist very long, the choices of the company are probably the cause. We can see it through the commercialized weapons and in particular a compact version of the High standart gun. It’s hard to believe that it sold. The gun 302 seems to be the desire to market a real compact gun and not just a shortened version of a model already manufactured. You can find more information on the following page weaponsman.com. 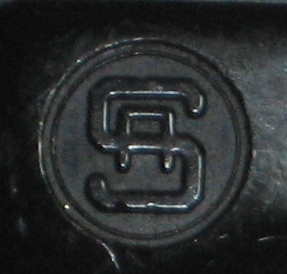 Characteristics of the Sterling 302

User disassembly of the Sterling 302

The user disassembly of this weapon does not require any special tools. The different steps to accomplish this task are detailed below:

Direct the weapon in a safe direction before handling. 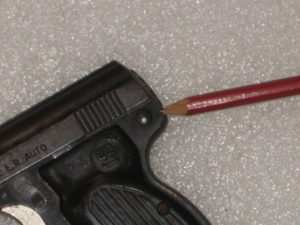 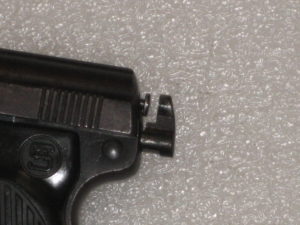 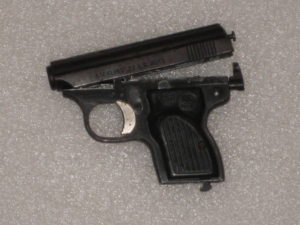 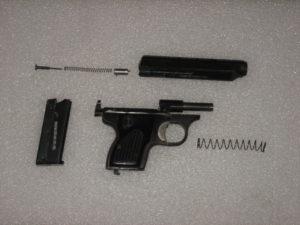 The pistol is composed of the following subsets:

The cylinder head is made of steel. It seems to be produced by micro-fusion and then machined. Traces of molding and machining are visible. The breech alone is rather heavy, massive. The weight of the piece is: 136 grams. Its dimensions are: length = 119 mm, thickness = 20.4 mm, height = 20.1 mm.

The distance between the barrel axis and the top of the carcass is 6 mm. This is important because if we compare this dimension on several weapons, it can give us an idea of the volume, the height on the hand of the line of sight, the diameter of the barrel, information on the choices made by the designers …

The diameter of the firing bowl (housing of the base of the case in the cylinder head) is about 8 mm (not easy to measure this dimension), for a depth of: 1 mm. The bowl of fire at its importance. Indeed, we will notice the presence of two holes: one for the tip of the striker and the second for the ejector.

The sighting system is directly cut into the mass. There is no handlebar or rise strictly speaking but a simple groove. Much simpler to implement, this machining allows to have enough benchmarks to take a sight. In any case, it is not a precision weapon intended for shooting at 25 meters.

The race of the breech (same with or without recovery spring) is: 30.6 mm whereas an ammunition measures about 25 mm. 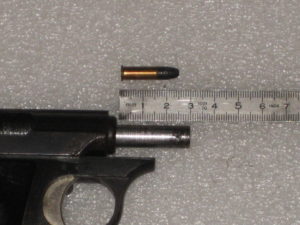 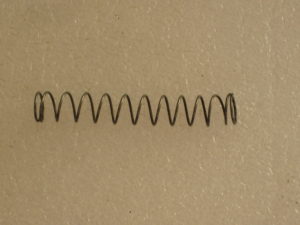 Although the cylinder head retains machining traces, the striker is perfectly machined. Its diameter is: 7 mm. The tip of the striker has a diameter of 1.5 mm for a length of: 2.7 mm. With an almost identical mechanism, we can compare the striker of the Sterling pistol (ring percussion) and that of the Bernardelli baby pistol (central percussion) and compare the choices of the designers. Two small chamfers are present on the tip of the firing pin, they are present to give a better penetration of the bead of the holster during the percussion.

The striker rests on its armor again after a rear stroke of the 26.7 mm breech. 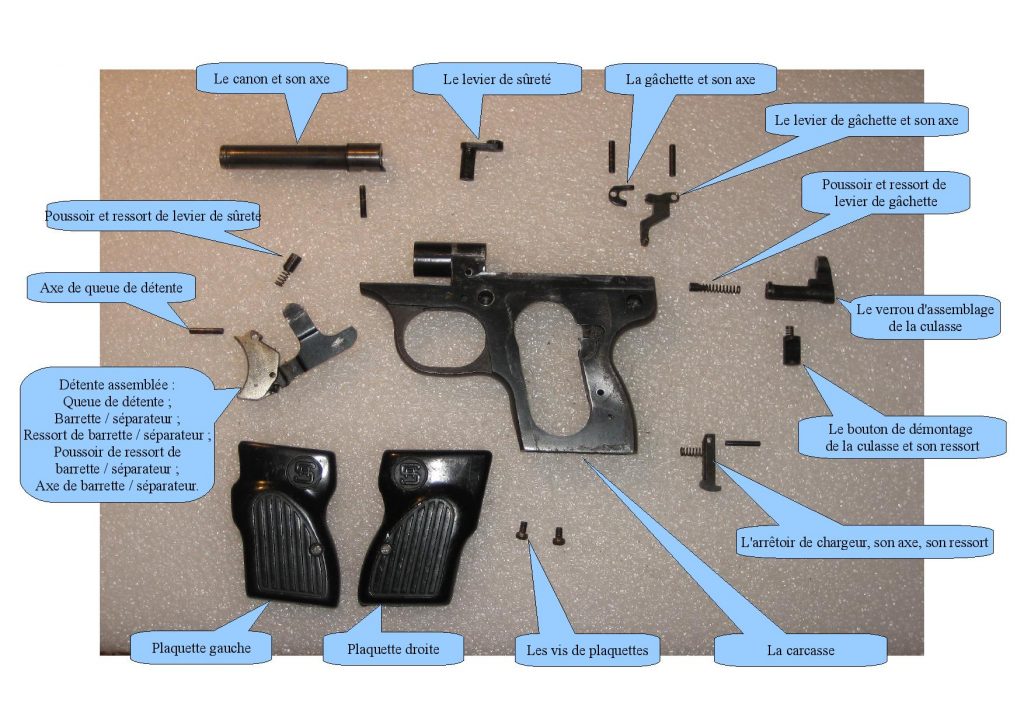 29 pieces make up this subset, here is the list: 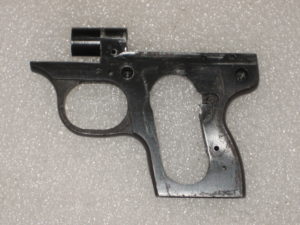 The barrel is particularly fine. The outer dimensions of the barrel are 9.4 mm and 11 mm for the rear part. It is held in place on the carcass by a post of 11 mm in diameter and 12.7 mm in length. Disassembly of the barrel takes place by removing the pin and tapping slightly at the mouth with a piece of wood .. or the press, but it is difficult to quantify his efforts with a press. In any case, this disassembly does not require great strength … at least not for the Sterling 302.

The stripes are not well defined, they seem to be worn.

The trigger mechanism groups together the following parts: 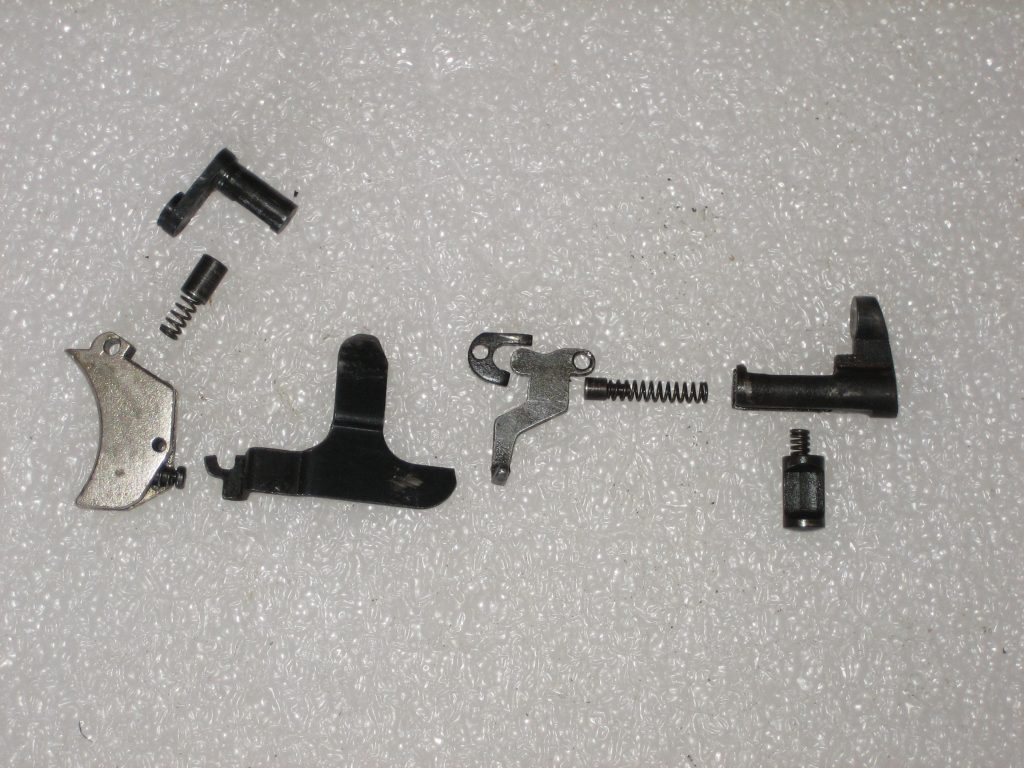 It can be seen above that the effort brought by the shooter’s finger pressure on the trigger tail is transmitted by the bar / separator to the trigger lever. The latter pivots around its axis and triggers the trigger. The latter lowers and releases the firing pin. The springs give the necessary strength to the parts to resume their original place.

In retreating, the breech disengages some parts of the chain formed by the trigger mechanism. This principle is present on the majority of the automatic pistols and avoids a possible shooting in burst. On the Sterling 302, the cylinder head must make a minimum stroke of 7 mm backwards to separate the gate / splitter from the trigger lever.

The charger consists of 6 parts:

The capacity of the magazine is 6 cartridges.

Rather than using a single piece of sheet metal, the manufacturer used two pieces that he then welded together by three points on each side. The two sheets used do not have the same thickness (0.8 mm for the rear sheet (lips of the loader), 0.6 mm for the front sheet). Taking each piece separately is very easy to do which decreases the complexity of the work. The thickness of the magazine is 9.2 mm (in its thickest part). The length is: 27 mm. The plates overlap and an inclined portion acts as a ramp for lifting the cartridge during feeding.

The charger slides perfectly in its housing.

The first shooting session did not go very well. It was not possible for me to shoot a complete magazine without a shooting incident. The recurring problem was the chambering of the cartridges. At each shot, there was a good ejection but the next ammunition did not “go up to room”. To introduce the next ammunition, I had to close the breech by pushing it in my hand. With an introduction to the hand (directly in the room, without cylinder head or charger), the cartridges were struggling to enter the room.

The second session takes place after polishing the room. Now the ammunition “go up to room” easily, no problem. I was able to shoot without incident.

Designed and built with ease, the Sterling 302 is a relatively coarse and robust weapon. The number of rooms is limited, there is no superfluous.

The Sterling 302 pistol would have asked for greater care during finishing and especially at the level of the room (at least for the model that I had between the hands). Which is still essential, why buy a defense weapon if it jams with each cartridge fired.

Although this is a low-cost weapon, it is important to keep in mind the number of operations that were needed to add to a carcass, breech and all other parts. Add to this first addition the time spent in adjustment and finishing. I do not have the information to date, but it would be very interesting to know the number of operations of milling, drilling, fitting … that it was necessary to do to finish a breech, a carcass, a pistol Sterling 302.

It could be interesting to have an aluminum casing to lighten the total weight of the weapon. Since the breech is massive, it is possible that it generates an imbalance of the weapon, to see.

With a volume much larger than the Bernardelli Baby for a lower caliber, the Sterling 302 pistol is also higher on the hand. On the other hand the grip is more pleasant on the 302, there is more room.