I would like you to discover or rediscover a very interesting mechanism. It was declined in different calibers and even in the versions, “Eureka” and “Mitraille”, respectively shooting two and three shot at the same time. This mechanism is that of the Manufrance model Buffalo rifle. We will study it through various extracts of catalogs and a didactic version.

Assembling a weapon around a Buffalo mechanism will result in a very elegant weapon. When looking for modern weapons of the same caliber or similar type, we will meet mostly so-called garden rifles. Now the stamp and finish of these modern equivalents have absolutely nothing to do with the design, charm and finesse of the Buffalo. Manuarm or Gaucher rifles are more economical and coarse modern equivalents too. 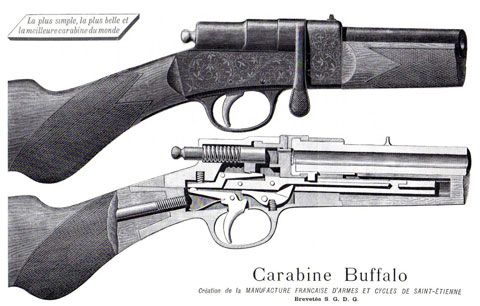 Distributed around a massive steel frame, the Buffalo mechanism is composed of few parts but good size. It seems unlikely that a break in the room will occur. If necessary, I would look more towards the breakage of a spring but not that of the firing pin, it is huge. Although this mechanism is simple in appearance, the shapes of these elements are far from being and require many stages of machining, adjustment and finishing. The forms of the main element of the moving set for example are no longer made on modern weapons. Nowadays, we mainly look for standard geometric shapes that are easily achievable. Which is a bit of an aberration since nowadays CNC machines can work wonders. It appears then that our peers preferred elegance to maximum profitability. It could also be that a certain mechanical complexity was the norm and did not prevent them from being profitable … to meditate. 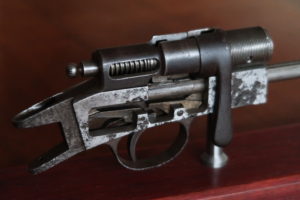 The Buffalo rifle is a lockgun that locks directly on the barrel. The barrel carries the tenons, the breech-shutter carries their housings, as a rule it is the opposite. The locking lugs are massive, each measuring 15 mm high, 5.8 mm wide, 1.3 mm thick. The shutter or the opening is done in 1/4 turn, by manipulating the lever of arming. This piece includes several functions such as: locking / closing, arming the firing pin, a firing pin safety by non-percussion if the cocking lever is not in the down position.

The barrel is screwed onto the frame by a thread of 28 x 100. Two small screws hold it in place on each side of the barrel. Various versions and profiles have been manufactured. Due to the presence of the locking lugs on the barrel, if one wanted to disassemble the latter, it would be necessary, after removing the two small screws of each side, to screw the barrel so that it leaves by the rear of the receiver. 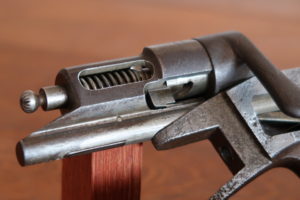 By closing the breech block or the moving assembly, the trigger is again placed above the trigger tail. Once the loading and the closing done, the shooter if it actuates the tail of detent will be able to fire. 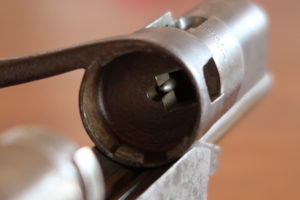 The telescopic aspect of the cylinder head reduces the size of the mechanism while having a real access to the room which is very important because it is a manual loading weapon. Few modern weapons allow such high access. Closed breech, the mechanism to a length of: 148 mm (not counting the part that enters the drum). 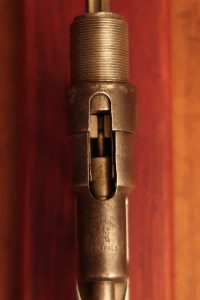 The pieces are all perfectly made, there is no trace of machining on the surface thereof. Only time and corrosion have mistreated some.

The stock is screwed on the frame. The screw is accessible under the butt plate. If you change this screw, pay attention to its length, it can act on the mechanism (especially come to touch the trigger).

Disassembly of the moving assembly:

The user disassembly of the Buffalo rifle mechanism consists in detaching the mobile assembly from the frame and then from the shutter and the firing pin.

If you own one of this weapon, it would probably be a good thing to disassemble the set of trigger / disassembly lever as it is quite possible that these parts and their housing have not known cleaning for many years. To do this, you must move two pins over the trigger. For the same reason, continue with the disassembly of the trigger. Thoroughly clean the assembly (parts, springs and housings) then reassemble everything clean after a light greasing. If you do not feel able to do it, or if you are not able to do it properly (which in my eyes is the same), have it done by a professional. Do not consider that it is money lost, since it is a weapon that can only take value, it is an investment. 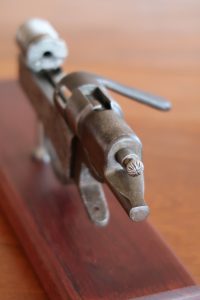 As quoted in the introduction, the mechanism has declined in particular versions: the Buffalo Mitraille and Buffalo Eureka. 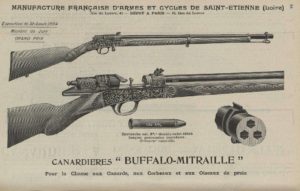 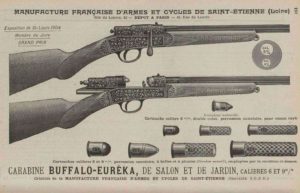 Who would have fun nowadays, to drill in the same bar of steel two or three holes? Probably not a lot of compagny. The reason is that this exercise brings several major difficulties :

It is easy to drill a metal bar from a single through hole. If you wishe to obtain a concentric barrel, it is then enough to pass to the metal lathe the outside of the bar and thus to obtain the outside having as reference the interior (machining between-point). But here it is much more complex. As if the Eureka rifle was not enough with its two holes in a single bar, the Manufrance engineers designed the Buffalo Mitraille with 3 holes.

Since these two or three shots start at the same time, this implies a suitable firing pin. Since you have to extract the three shell pulled together, you also need a two or three slot extractor. So a piece more complex.

It would be interesting to know what were the motivations of Manufrance engineers who created the Buffalo Mitraille or Eureka. It is a shame not to be able to go back in time and discuss with these men and women their visions and the means of realization available at the time. It was a bold choice, it was done.

Manufrance has a special place in my heart for more than one reason. This place is strengthened when one studies in depth the mechanisms coming from this company. Over time, there is continuity. This is the synthetic side of the weapons mechanisms of Manufrance. Under an apparent simplicity hides mechanisms terribly well designed, solid, with few parts, using high quality materials. One might think that simplicity is easy, it is not the case. The fact of using few pieces hides parts with multiple functions and complex shapes. We can include in this common thread: the French pistol, the Buffalo rifle, the Simplex rifle, the Robust rifle, the Ideal rifle …

They are now weapons of another era where the products of France and old Europe were to be exported anywhere in the world (North Africa, Black Africa, Indochina, South America, Oceania, Europe …) and resist all kinds of aggression to be transmitted from generation to generation.

I started this job, after graduation, working in a Parisian armory. A stone’s throw from it, which still exists, is a home of Malian workers. The latter in search of the “waxed marfa” (probably bad spelling, translation: good rifle) bought, to send to Mali, single-shot rifles Baikal but the rifle that had in their eyes a real interest was the Simplex rifle. It was around 1994-2000: well after the closure of Manufrance.

I pay tribute through this article to the engineers, technicians, armourers Manufrance who had the talent to build reliable and robust mechanisms.