The Bernardelli baby pistol in 25 acp 1/2

The opportunity is given today to write on the gun mod 68 or “Baby” V.Bernardelli.The weapon that I present to you is in gauge: 6.35 mm or 25 acp.

I wanted to talk about this weapon because I did not expect to find such a beautiful finish on a weapon of this type, namely: a small defense gun. The second reason for writing this article is the mounting of the barrel on the carcass. This one is not very current and very well executed, it deserves that one pays there also. 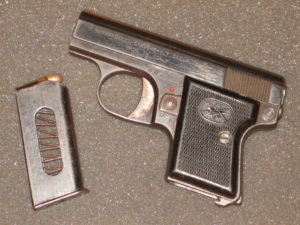 I will not go back on the history of this weapon because I do not have any elements on the question. It seems that the first models appeared in the years 1940/50. You can find the history of the firm V.Bernardelli, by clicking on the logo of the brand.

There is a version of this weapon in 22 caliber shorts. It would have been useful to compare the two models in order to relate commonalities and differences. I was not allowed to combine the two versions at one time. Therefore, I can not do this comparison today. The future will give me the opportunity to do this experience later. 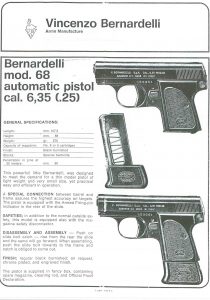 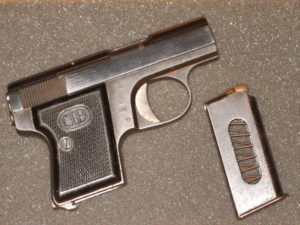 User disassembly of the Bernardelli Baby:

The user disassembly of this weapon does not require any special tools. The different steps to accomplish this task are detailed below: 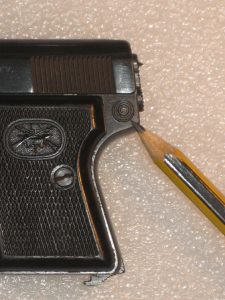 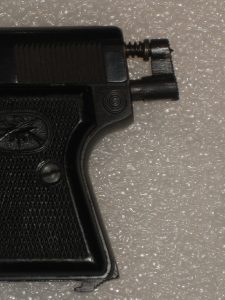 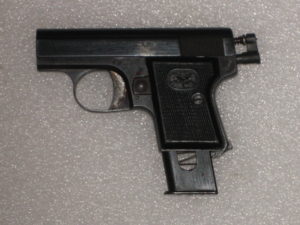 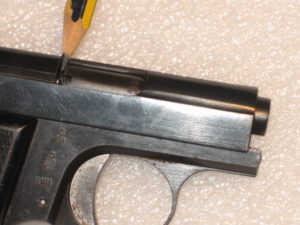 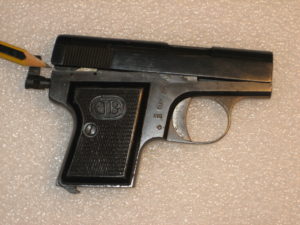 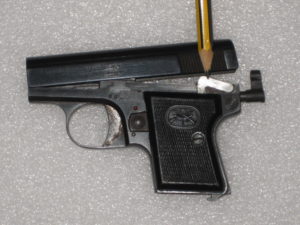 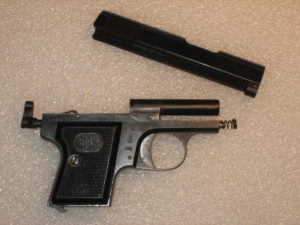 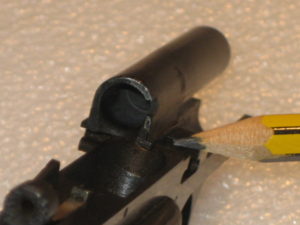 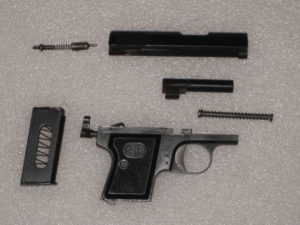 The subsets of the Bernardelli Baby

The subsets of the Bernardelli Baby pistol in 6.35 mm are:

Let’s detail each of these subsets.

The breech / barrel subassembly of the studied weapon is composed of 11 pieces:

The diameter of the firing bowl (housing of the base of the case in the cylinder head) is: 8 mm for a depth of: 0.94 mm.

The maximum stroke of the barrel in the breech (same with or without a recuperating spring) is: 28 mm whereas an ammunition measures approximately 22.8 mm. 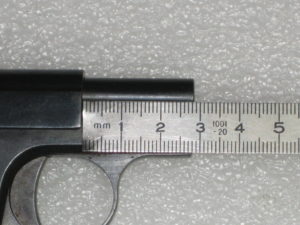 The “gunsmith” disassembly of the parts constituting the cylinder head consists in driving the axis of the extractor from its housing by means of a 1.5 mm pin punch. The axis is fine and short. The extractor spring is 3 mm long and has a diameter slightly less than 3 mm. These pieces are small: be careful not to lose them. Disassembling these parts should cause you to properly clean the extractor housing. We do not often have access to this site, so it’s an opportunity to do things right. Clean the parts also before reassembly. 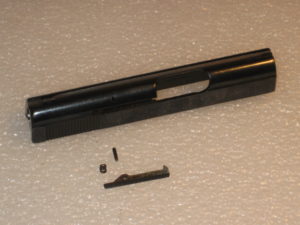 What choice did the manufacturer make? To date, I do not have the exact answer to the question because I do not have access to the dimensions of the piece in shorts. An exploded view of the short version, however, helps us in our reflection. We can see on the exploded below the form of the striker but also that the ejection is not operate by the striker itself but by the extension of the guide rod of the striker spring. 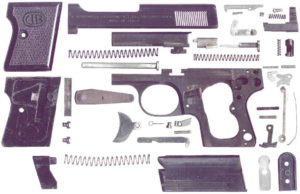 Was the barrel scratched after machining its profile? Or, did the scratching take place first and then the machining of the profile? This would be interesting information to know. I would go for the second solution (because the most common). Namely: the use of steel rod of several tens of centimeters drilled and scratched to the caliber 6.35 mm. The bars are cut to the desired length. The profile of the barrel is obtained by machining these portions of bars. Then the room is made with a specific strawberry (strawberry room). The barrel of the Bernardelli baby can be obtained from a strip of 14 mm diameter bar (minimum). The barrel has 6 scratches on the left.

One of the important things about this weapon is the method of assembly chosen by the manufacturer V.Bernardelli to bind the barrel and the carcass. Indeed, this type of assembly is little used. The barrel is held on the carcass via an inverted T-shaped fit. The barrel enters laterally in a groove made in the carcass. The machining does not present simple shapes: that is to say rectangular (what one would expect) but are rounded shapes. If the machining of the female housing requires a milling cutter, the male form requires more complex machining and fitting. I think this choice is a desire of the manufacturer to avoid the appearance of cracks in the corners (especially the upper corners) if a rectangular geometric shape had been chosen. The adjustment on the weapon at my disposal is particularly well done, the barrel once on the carcass has only a very weak game. 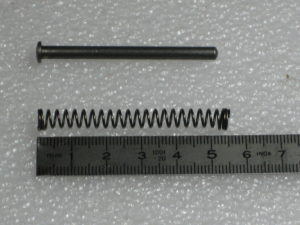 The following in a future article.